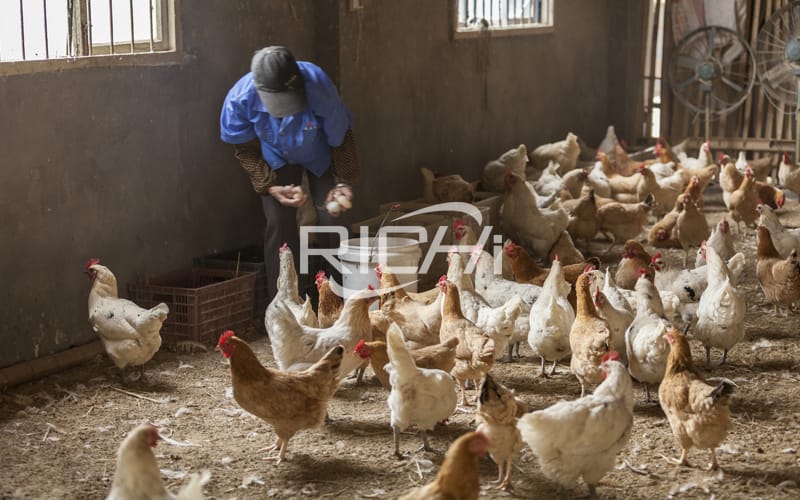 Common phenomenon: It is difficult to cool the local area, and the chickens leave the area automatically. This phenomenon occurs in flat-housed chicken houses, especially those on the ground, and also appears in the middle of the house and the waist rib area on both sides.

Cause: This phenomenon is mostly caused by improper operation. The cooling damp curtain is installed on both sides of the head end, the negative pressure of the damp curtain air inlet is too low or too high, and the airflow coverage is uneven. The air flow direction is shown in the following figure:

Common phenomenon: the temperature difference between the tail and the head is more than 3 ℃, and some high-density cages can even exceed 5 ℃.

Improvement method 2: For a house more than 120 meters long, you can try to install a wet curtain on the side wall in the middle of the house, and install fans at both ends of the house, but the investment of such fans and wet curtains will be doubled. I have only seen such pictures of foreign chicken coops, no data has been collected, and the actual effect is not very clear.

(2) Reason 2: The chicken house is not closed tightly. The main reason is that the air inlet windows, lighting windows, eaves and walls, the head and tail doors and the outlet are too tight, resulting in the house wind speed is lower than the design wind speed or the difference between the front and rear wind speed is too large.

Improvement method: improve the airtightness of the chicken coop, especially the tail outlet can be sealed with a 3mm thick rubber soft plate, nailed to the top, and can be automatically opened and closed as the manure cleaner enters and exits.

Common phenomenon: The wet curtain water pump is turned on, but the cooling effect is not obvious. Only the head of the chicken house feels cool within 10~15 meters, and it is difficult to lower the temperature later.

Reason: High temperature and high humidity weather, such as the sun exposure after thunderstorm, outdoor relative humidity exceeds 80%, evaporation is difficult, and the cooling effect is not obvious.