In the breeding process, there are many factors that affect the development of the breeding industry, and the loss caused by diseases is particularly prominent among many factors. Environmental factors play an increasingly important role in the occurrence and development of diseases. Ignoring environmental factors will often lead to multiple and high incidences of livestock and poultry diseases, and can even influence the results of drug treatment of diseases.

1. The effect and influence of factory site on chicken disease

In the process of intensive breeding, the appropriateness of site selection, the quality of site planning and construction, are directly related to the health of livestock and poultry and the performance of their production. In most grassroots farms, the site construction is relatively random and relatively backward. Some are built directly on the edge of the village, or even inside the village. There is no concept of distance between the farms, which results in free-range farming in the village. The frequent occurrence of disease epidemics and cross-infections between households and farms, and between farms and farms are also important factors that make it difficult to control diseases.

In the construction of the site, many farms do not have the necessary harmless treatment facilities, and there are often the phenomenon of sick livestock and poultry running around, sick and dead livestock and poultry throwing away, and vaccine bottles randomly discarded, especially livestock and poultry manure. Dealing with problems is often piled up next to the breeding farm. When it rains, the manure water flows everywhere. It is not known that the number of pathogenic microorganisms contained in one gram of livestock and poultry manure can reach hundreds of millions. The above phenomenon is a practical problem in many grassroots farms, and these will inevitably cause a large number of detoxification and dispersal problems. It can be said that if these environmental problems are not solved, there will be no way to talk about disease prevention and control, and even affect the farms. Cause a devastating blow. 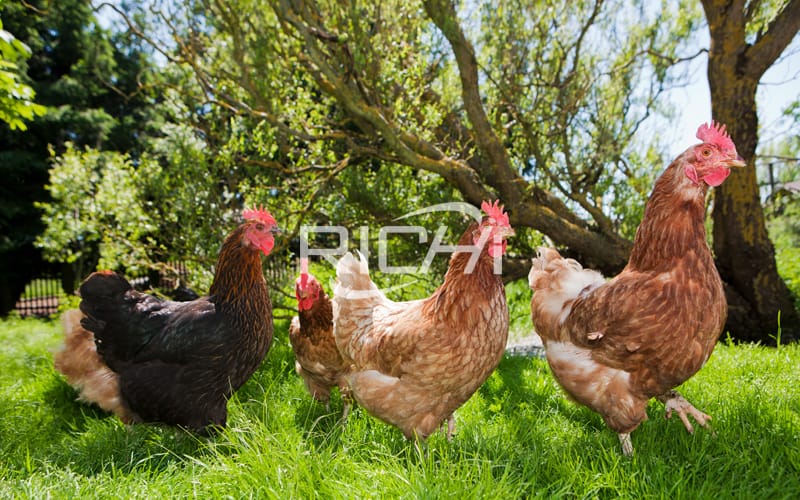 2. The effect and influence of temperature on chicken disease

Proper temperature is an important guarantee for the performance and health of livestock and poultry. However, due to temperature problems, various diseases caused by temperature differences are not uncommon. Diarrhea, colds, respiratory diseases, cold and heat stress, etc., are all related to improper temperature. Some directly cause the disease, and some are in the occurrence or development of the disease. In the process, the original condition is aggravated or the treatment is directly ineffective. This situation should arouse great attention in the treatment of the disease. Take a chicken farm in China as an example, the farmer went to many outpatient clinics to see the chickens. The doctors were right and the medicines were right. They just couldn't cure the chicken disease. More than 200 chickens died every day. Finally, the author found that the problem was the temperature. There was sea breeze in the area, and the temperature difference between day and night was large. After the temperature problem was solved, the chicken disease quickly recovered with the corresponding medicine. Temperature, a well-known factor, is also the most neglected factor, and its role and influence in diseases cannot be ignored.

3. The effect and influence of harmful gases on chicken disease

The healthy growth of livestock and poultry and their proper production performance require a good air environment, especially for chickens, because chickens are most sensitive to ammonia. Some people have also proposed that chickens are raising air, which explains the importance of air quality. Sex. However, in actual breeding, the existence of harmful gases such as ammonia and hydrogen sulfide in the livestock house is almost inevitable, but the situation is only serious. The harm of harmful gases is most obvious in winter and spring. In winter and spring, the livestock house is generally sealed for heat preservation. If the feces are not cleaned in time, harmful gases will accumulate in the livestock house, causing tears in the eyes of livestock and poultry, directly causing respiratory symptoms or when there is respiratory disease. Play an aggravating role. Especially in the broiler breeding process, broiler ascites caused by the combined action of harmful gases and pathogens is difficult to treat, causing unnecessary serious losses. This situation is very common in grassroots farms.

In addition to the common diseases caused by harmful gases, the ammonia in the livestock house will also enter the blood from the respiratory tract through the alveolar epithelium, combine with hemoglobin to produce alkaline methemoglobin, destroy the blood's oxygen transport function, and cause tissue hypoxia . In such an environment, the production performance of livestock and poultry will be greatly affected, and the body's resistance will decline rapidly, causing various diseases and even death.

4. The effect and influence of water quality on chicken disease

The diseases and hazards caused by water quality problems to livestock and poultry are mainly reflected in the prevalence of infectious diseases and the acute and chronic poisoning caused by them. When water quality is contaminated by pathogenic bacteria, livestock and poultry will become infected and sick through drinking water or contact with water sources. Farmers in many places have reported that frequent outbreaks of E. coli and long-term cure are often caused by pathogenic E. coli contamination in the drinking water of livestock and poultry. At this time, the disease can be completely controlled only by disinfecting the drinking water with water. When the water quality is polluted by toxic substances such as arsenic, lead, and mercury, it will cause a decline in production performance in the least, and cause acute or chronic poisoning, and even death.

In addition to the above factors, environmental factors such as light, noise, wind speed, etc., will have various effects on the breeding process, and will also be closely related to the occurrence and development of diseases. Facts have proved that in the current breeding, only Only by paying attention to environmental issues can the animal husbandry develop healthily and sustainably, and only by breeding to obtain the economic benefits it deserves.

how much is a poultry feed mill？

how to make broiler feed formula？

how to make chicken feed for layers？

Previous: Seven issues that pig farmers should pay attention to when the temperature suddenly drops in autumn Next: What issues should be paid attention to in the construction of biogas digesters in pig farms?