The "number one enemy" of autumn layer feed-Mycotoxins

The quality of layer feed is a key factor in determining the efficiency of layer breeding. At present, mycotoxins have become a key issue to be prevented in the chicken feed industry and breeding terminals. In the selection of feed ingredients, production, processing, and transportation and storage, mycotoxins can cause different levels of pollution to the feed. Even if the quality of the feed looks good, there may be mycotoxin contamination. Mycotoxins are invisible and intangible, and have traces of Synergy, accumulation and difficulty in diagnosis will virtually reduce the efficiency of layer breeding.

The harm of mycotoxins to laying hens depends on the degree of feed contamination, the type and concentration of toxins, and the age of poultry. Mild mycotoxin pollution can slow down the growth of chickens, reduce feed intake and poor uniformity, affect the absorption and utilization of nutrients, and cause the quality of eggshells to decline. Mycotoxins can also cause oral ulcers, muscular gastric ulcers, decreased immunity, mold liver, and severe illness can lead to acute illness and even death.

Under normal circumstances, we will use a composite adsorption mold release agent, but sometimes the effect is not obvious. This is because the mold release agent can only act on the toxins in the feed and intestinal tract, and has no way to deal with the toxins that enter the environment in the body. In this case, the animal needs to detoxify itself. The liver is the largest detoxification organ in the animal's body. While reducing the intake of external toxins, we need to enhance liver function and help the liver detoxify and detoxify. 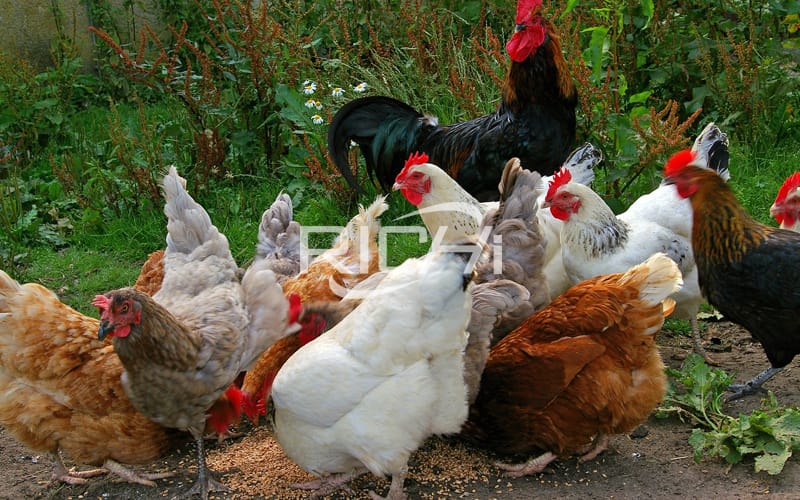 Measures to prevent and control mycotoxins in laying hens:

Choose to purchase high-quality feed materials. Raw materials that are obviously moldy must not be used. Mycotoxin testing must be carried out when purchasing feed. If aging grain is used, it can be mixed with new corn in a certain proportion according to the situation. Ensure the storage environment, especially the management of the corn warehouse, and make a reasonable plan for raw materials first in, first out.

You can add some antioxidants, hepatoprotective additives to the feed. The mold release agent can physically adsorb the mycotoxins in the feed and reduce the animal's absorption of mycotoxins. Bile acids can also be added to the feed, which can stimulate the liver to secrete bile and remove toxins accumulated in the liver, thereby improving liver function and reducing the damage of mycotoxins to the body.

（1）how to manufacture laying hen feed?

（2）how to start layer chicken feed business in kenya?

Previous: The price of peanut shell pellet fuel has such a big relationship with the raw material Next: Please pay attention to the anti-nutritional factors in the piglet feed

MOST POPULAR
Chickens that come out of the cage in 40 days are fed with hormones and high-calorie feed? Can you eat it? 2021-01-26
Efficient use of poultry livestock fish feed pelletizer machine and improvement of granulation effect 2021-01-25
When feeding goose with green feed 2021-01-25
Business proposal for a large capacity annual output of 20,000 tons biomass wood waste pellet production plant in China 2021-01-24
How to buy compound feed for feeding animals? 2021-01-24
Application of machine for grading animal feed in the cleaning section of feed raw materials in animal feed mill factories 2021-01-23
Proper mixing ratio during animal chicken feed line production 2021-01-23
Business plant for complete 70 ton/day horse manure organic fertilizer pellet production plant factory for Australia market 2021-01-22