Expansion processing is a new technology for fish feed processing line,shrimp feed production line,etc. The expansion of feed in the extrusion cavity is actually a high-temperature transient process: the mixture is at high temperature (110-200 ℃), high pressure (25-l00kg/cm2), and high shear In the environment of high strength and high moisture (10%-20% or even 30%), a kind of bulky and porous feed is formed after continuous mixing, conditioning, heating and pressurization, maturation, extrusion die holes and sudden pressure reduction. 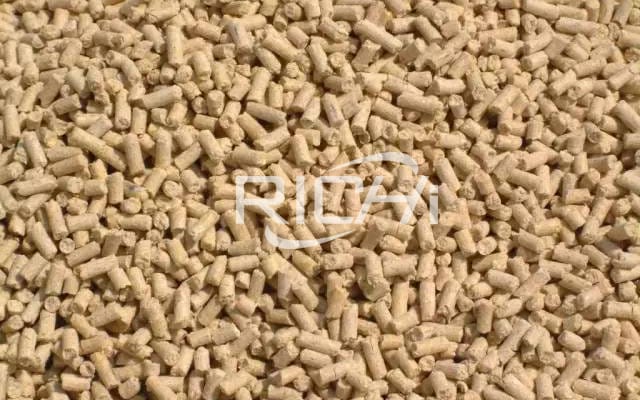 Temperature, pressure, friction and moisture will cause the loss of vitamins. In the extruded feed, the loss of VA, VD, and folic acid is 11%, the loss rates of sulfamonium mononitrate and sulfaammonium hydrochloride are 11% and 17%, respectively, and the loss rates of VK and VC are 50%. Loss in feed is halved. Leng Yongzhi et al. fed the carp with extruded materials without natural food at all. A few individuals in the fish school had gill bleeding, which is estimated to be related to the destruction of heat-sensitive vitamins during feed processing.

(4) Loss of protein and amino acids

The high temperature during the puffing process causes some of the reducing sugars in the raw materials to undergo Maillard reaction with free amino acids, which reduces the utilization of some proteins. In addition, the protein can form lysaminoalanine under high temperature under alkaline conditions. Excessive heating, especially in the case of high pH, ​​can make some amino acids racemize to produce D-type amino acids, which makes the protein The digestibility is greatly reduced.

Lysine is the most vulnerable to heat loss, followed by arginine and histidine. Using in vitro research methods, Wang Lin et al. measured grass carp and Luo Li measured the enzymatic hydrolysis kinetics of allogynogenetic crucian carp intestines before and after expansion of 7 feed materials, which proved that expansion has a low egg content and high starch content. Feed ingredients have a positive effect, but have an adverse effect on high protein content (except feather meal). Therefore, it is not suitable to use soybean meal, fish meal and meat and bone meal after puffing in the compound feed of fish.

Extruded feed has a more complicated process than general pellet feed, more equipment investment, higher power consumption, and lower output, so the cost is higher, generally about 20% higher than the cost of pellet feed. 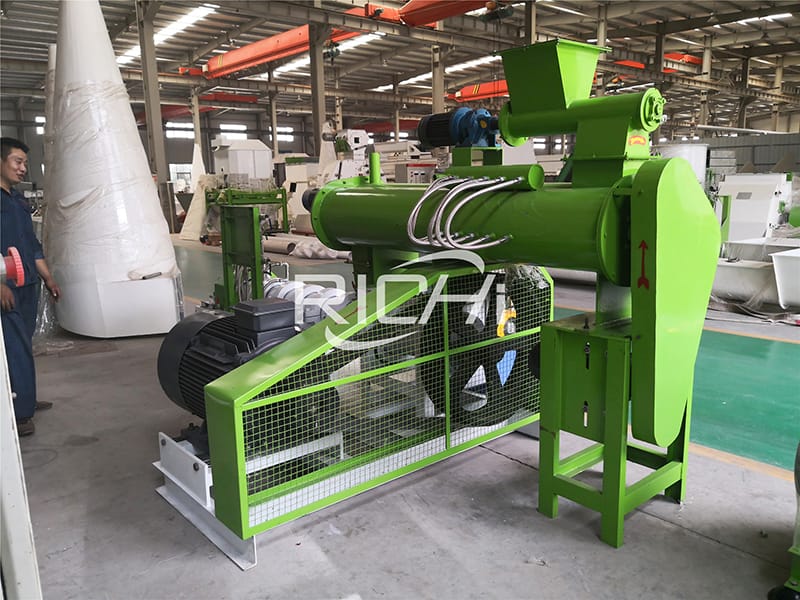 2. Existing improvements to the drawbacks

The effect of different extrusion conditions on protein quality depends on the loss of available lysine during the extrusion process. When the moisture content of the raw material is lower than 15% and the extrusion temperature is higher than 180℃, the lower the moisture and the higher the temperature during extrusion, the greater the loss of lysine and the lower the biological potency of protein, which reduces Reducing sugar content such as glucose and lactose and increasing the moisture content of raw materials can effectively reduce the occurrence of Maillard reaction. When the raw material moisture is 15%, the extrusion temperature is 150°C, and the rotation speed is 100r/min, the biological potency of the product protein is significantly improved compared with the untreated raw material.

There are usually two post-addition methods. One is to directly mix heat-sensitive components or components containing heat-sensitive components with feed. This method is generally to mix the post-added ingredients with certain viscous colloids uniformly into a mud or suspension, and then mix this mixture with pellets. It is possible to combine a small amount of biologically active substances (including vitamins, hormones, enzymes, bacteria, etc. or one of them) into processed food or animal feed, and firstly mix the biologically active substances with an inert carrier It becomes muddy, insoluble at this time, and then forms a uniform suspension. The suspension is transformed into a form that can act on the pellets through a device to form a uniform film covering the surface of the feed pellets.

The other is the spray method, which uses a high-precision metering pump to make the added liquid material pass through a special pressure nozzle to spray atomized droplets to be absorbed by the feed. In addition to considering that the added components can be evenly and stably dispersed in the selection of liquid, it is also necessary to consider its binding ability with feed pellets and the influence of environmental factors. In addition, some methods such as embedding, derivatization, carrier adsorption, etc. are used to pre-treat heat-sensitive substances to improve the thermal stability of these substances. quality.

Grease spraying requires the temperature of the material to be 30～38℃, which can make the grease evenly dispersed in the feed and increase the energy of the feed. The surface of the particles is also relatively smooth and well-proportioned, and the appearance is greatly improved. The source of oil has a different effect on the degree of expansion. The oil contained in the feed material itself has a smaller influence on the degree of expansion than the added pure oil. Therefore, choosing raw materials with high oil content to increase the oil level of the feed is more conducive to the expansion of the feed production.

(4) Ideas for improvement of extruded feed

In view of the existing problems of extruded feed, some people propose to improve the quality of feed by changing the feed processing technology, but this method has large mechanical wear, unstable operation, low output and high cost. Through the above analysis, it can be seen that the expansion technology can significantly improve the digestibility and utilization of feed materials with higher starch content, such as secondary meal and corn, while reducing the digestibility and utilization of soybean meal and fish meal as a whole. Its positive effects such as destroying anti-nutritional factors can also be solved by hard pellet feed processing technology.

Therefore, it is completely conceivable to graft the extruded technology with the hard pellet feed processing technology, and only extrude the raw materials suitable for expansion such as secondary flour and corn. It can also be obtained through purchase, and then mixed with the unsuitable raw materials to use hard pellets. Processing by the processing unit, in this way, can maximize the strengths and avoid weaknesses as much as possible, give full play to the feed efficiency, and also greatly reduce the cost of feed processing.