According to the different nutritional content of feed raw materials for laying hens, it can be divided into energy feed, protein feed, rough feed, mineral feed, vitamin feed and additives.

Energy is the most important nutrient for chickens. Any feed that contains less than 20% crude protein and less than 18% cellulose in dry matter is classified as energy feed. The commonly used energy feeds mainly include the following.

mainly includes corn, broken rice, wheat, and wheat flour. Corn is mostly used in northern China. Corn is the most used feed material in layer feed, and it generally accounts for about 65% of layer diets. Corn contains a lot of starch and is easy to digest and absorb, and the content of linoleic acid in fat is high. When storing corn, care should be taken to prevent mold, and the germ of moldy corn is blue-green.

mainly includes wheat bran and rice bran. Rice bran is generally not used in layer feed. Wheat bran contains more fiber (8.5%-12%), has a low energy value, and metabolizable energy is only 7.1 MJ/kg. The crude protein content is relatively large, up to 12% to 17%, and its quality is higher than that of wheat kernels, rich in lysine 0.5% to 0.6%, and methionine only about 0.1%. The phosphorus content of wheat bran reaches 1.13%, which is the highest among plant feeds, but mostly in the form of phytate, which is difficult to digest and utilize. Contain vitamin B1, vitamin E, lack of vitamin B12, vitamin A and vitamin D. Wheat bran has a loose texture, good palatability, and has a laxative effect. Adding wheat bran to the diet of laying hens can accelerate the growth of chickens and promote the growth of feathers, which can account for 5% to 10% in the diet.

Including animal fats and vegetable fats. The commonly used animal fats include fish oil, tallow, mutton oil, lard, bone oil, etc., and their metabolizable energy levels are relatively high (more than 2.5 times that of corn). When using it, it is mainly to avoid the use of deteriorated grease. Vegetable oils include corn oil, rapeseed oil, soybean oil, and mixed oils. Generally, it is not necessary to add fat in the feed of laying hens, and only add 1% to 2% of cooked soybean oil in the hot season or when the chicken weight is not up to the standard. 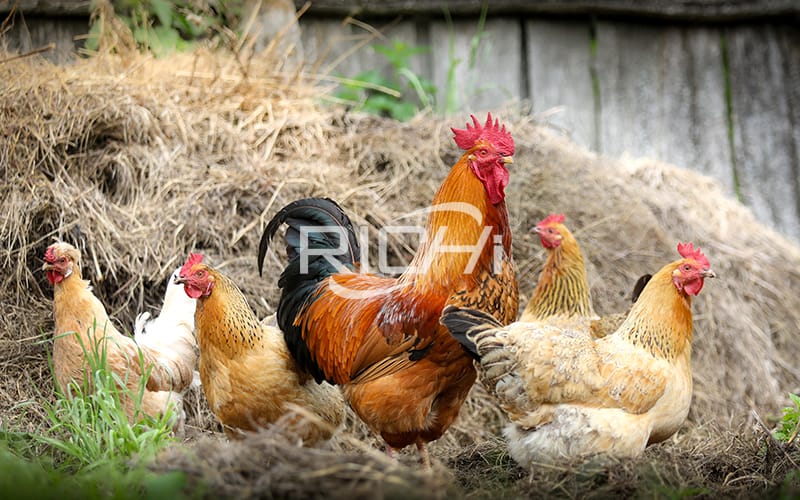 Protein is the main component of chicken body cells and eggs. The utilization rate of protein in chickens mainly depends on the content of amino acids in the feed ingredients and the balance of amino acids. Commonly used protein feed materials include plant protein feed and animal protein feed.

mainly includes fish meal, meat meal, meat and bone meal, blood meal, feather meal, etc. The fish meal used in China (including imported fish meal and domestic fish meal) is pure fish meal made from whole fish without foreign matter. Various types of fishmeal vary greatly in protein content due to different raw materials and processing conditions. The protein content of high-quality fish meal is very high, generally about 64%, the amino acid balance is also very good, and the content of lysine and methionine is high. The content of calcium and phosphorus is relatively high, and all phosphorus is available phosphorus. It also contains vitamin A, vitamin E and vitamin B12, which are not found in all plant feeds, and the content of other B vitamins is also high. It is also worth mentioning that fish meal contains unknown growth-promoting factors. Due to the high price of high-quality fishmeal, it is generally only used in the chicken feed about 3%, and the fishmeal-free diet is generally used during the rearing and laying period.

Feather meal is made by high-pressure steaming, drying and crushing of poultry feathers, with a protein content of over 80.3%. When shared with other animal protein feeds, it can supplement the protein in the layer diet. Because of its low digestibility, it is best not to use it.

Mainly includes bone meal, stone powder, shell powder, calcium hydrogen phosphate and salt. Stone powder is the most economical and commonly used calcium supplement. The dosage in the feed for laying hens and adult chickens at the growth stage is 1%-2% and 6%-8%, respectively. The amount of shell powder is generally 1% to 2% for chicks and 5% to 7% for laying hens. The dosage of table salt is generally 0.25% to 0.3%.

The functions and deficiency symptoms of several major minerals are as follows:

Symptoms of deficiency: The symptoms of calcium deficiency in chickens can be summarized as: osteoporosis or low calcium rickets, abnormal posture and footwork; hindered growth and development; reduced feed intake; prone to internal bleeding.

The functions and symptoms of several major vitamins are as follows:

Function: Required to form 4 kinds of coagulation proteins and participate in blood coagulation.

Symptoms of deficiency: prolonged clotting time or non-stop bleeding and internal bleeding; usually added when the chicken is broken.

Function: Participate in various metabolisms in the chicken body.

Symptoms of deficiency: indigestion, anorexia, dermatitis, deformity of the feet and legs, growth and development obstruction.

Function: Participate in the composition of intercellular substance; detoxification, anti-oxidation.

Lack of symptoms: scurvy, easy to fracture, wounds and ulcers are not easy to heal.

Water is the main component of body fluids and plays a particularly important role in the normal metabolism of poultry. Although the chicken's water requirement is uncertain, it is still an essential nutrient. The water requirement of chickens is affected by the following factors: environmental temperature, relative humidity, diet composition and growth. It is generally assumed that the water consumption of chickens is twice the feed intake, but in fact the water consumption varies greatly.

Previous: Why is fish meal the best feed material for the aquaculture industry? Next: Simple method for removing aflatoxin in animal feed