1. The influence of the animal feed mill cattle feed mixing machine model and its manufacturing level on the mixing

Under normal circumstances, as long as the mixer meets the following requirements, it is qualified and usable:

(3) The structure is simple and firm, the door switch is flexible, the operation is convenient, and it is convenient for testing, sampling, cleaning and cleaning;

(4) With suitable power equipment, it can work normally under full load;

(5) Under the premise of ensuring the mixing quality, the energy consumption is low. 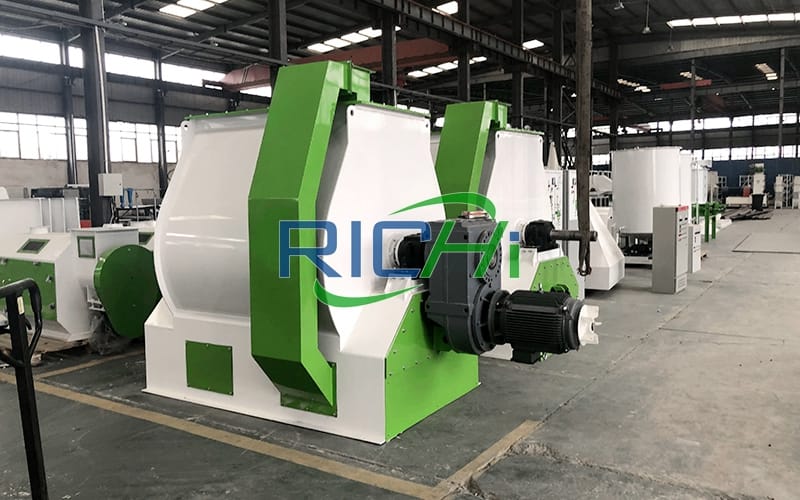 The type of animal cattle feed mixer machine can be divided into many types according to different classification methods, mainly horizontal, vertical, horizontal paddle, drum, left and right, planetary, rotating container, V, and double cone. Etc., there are two states of intermittent work (batch type) and continuous work. The manufacturing level of different animal feed powder mixer manufacturers will definitely have advantages and disadvantages. When purchasing a mixer, you should choose a mixer with a higher manufacturing level according to your own production needs.

The paddle cattle fodder mixing machine is difficult to mix the powder very uniformly, but when the feed needs to be added with molasses and the addition amount is as high as 30% to 40%, it is quite suitable to use this type of mixer for mixing; The double-cone mixer and V-type mixer are respectively more suitable for mixing materials with better fluidity and poor fluidity.

The level of mixing efficiency, the length of mixing time, and the speed of mixing are mainly determined by the type of mixer and the manufacturing accuracy of the equipment itself. Generally speaking, the time required for the horizontal cattle cow feed powder mixer to mix uniformly is relatively short, while the vertical mixer takes longer. Of course, the length of the mixing time also depends on other factors such as the type of raw materials and their physical properties. 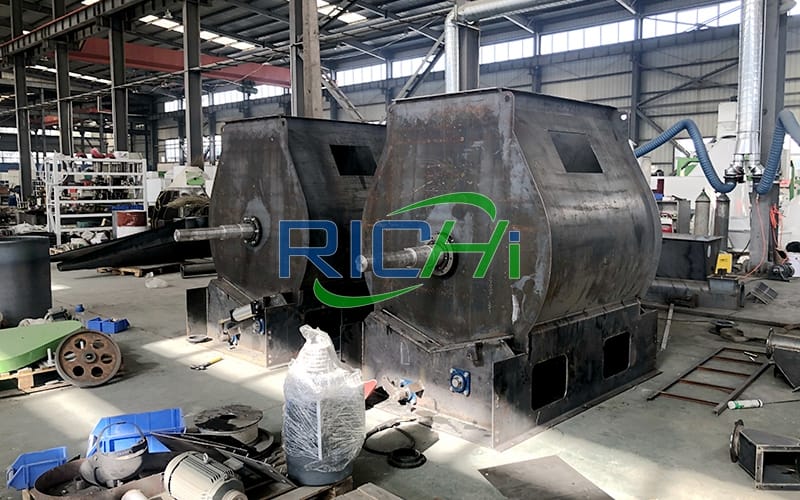 2. The influence of the physical properties of the material on the mixing

The closer the main physical properties of the materials to be mixed are, the smaller their separation tendency, the easier it is to be mixed uniformly, the better the mixing effect, and the shorter the time required to achieve uniform mixing. The physical properties mainly include the particle size, shape, bulk density, surface roughness, flow characteristics, adhesion, moisture content, fat content, pH, etc. of the material. The particles of materials with high moisture content are easy to agglomerate or form agglomerates, are not easy to be uniformly dispersed, and the mixing effect is unsatisfactory. Therefore, it is generally required to control the moisture content of the mixed materials not to exceed 12%. Under the condition that the required effect of the formula is not affected, silica, precipitated calcium carbonate, etc. can be added in an appropriate amount when necessary, which is beneficial to improve the cattle feed mixing effect.

Some additives in the feed need to be pre-mixed with a carrier (or diluent) before being added to the mixer for cattlel feed to make an additive premix, and then added to the mixer in a certain order to mix with other components. The particle size of the additives that need to be diluted is generally finer, so choose a carrier with a particle size and density close to it. Suitable carriers include commonly used feed components, such as soybeans, wheat bran, defatted rice bran, etc. Generally, materials with fine particle size, no dust, and affinity for the active ingredients in the additives are selected as diluents (or carriers). Choosing neutral materials helps maintain the stability of vitamins and other active ingredients.

3. The influence of the filling volume of the livestock cattle feed mixer on the mixing

The mixer equipment for cattle feed mainly relies on three mixing methods of convection mixing, diffusion mixing and shear mixing to make the materials move in the machine to achieve the purpose of mixing the materials uniformly. No matter what type of mixer, the appropriate amount of filling is the mixer. An important prerequisite for normal work and expected results. If too much material is loaded, the mixer will be overloaded. More importantly, too much material will affect the cyclic movement of the materials in the machine, resulting in a decrease in mixing quality; if too little material is loaded, it will not be sufficient Exerting the efficiency of the mixer, wasting energy, is not conducive to the flow of materials in the mixer, and affects the mixing quality. 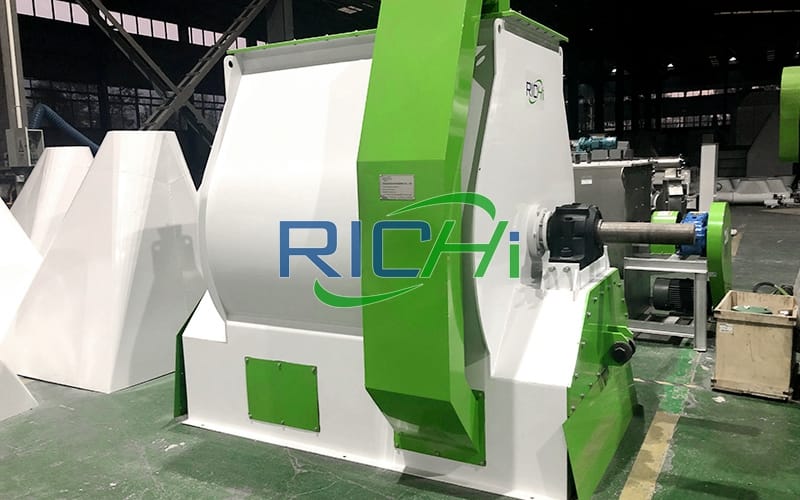 4. The mixing time should be appropriate

In most cattle compound feed production lines, the most commonly used mixers are basically batch-type, and for batch-type feed mixer with hay conveyor, there is a problem of the best mixing time. If the mixing time is too short, the materials will be discharged without being fully mixed in the cow feed mixer machine, and the mixing quality will definitely not be guaranteed. However, it is not that the longer the mixing time, the better the mixing effect. Experiments have shown that any material with good fluidity and uneven particle size has a tendency to separate. If the mixing time is too long, the material will be over-mixed in the electric cattle feed mixer. Will cause separation, also affect quality, and increase energy consumption.

Because in the mixing process of cattle cow feed making materials, mixing and separation are carried out at the same time. Once the mixing effect and separation effect reach a certain equilibrium state, the degree of mixing has been determined. Even if the mixing continues, the mixing effect will not be improved, but it will be Separation due to excessive mixing. The mixing time should be determined according to the combination of the mixer model and its manufacturing level, the physical characteristics of the material, and the actual test results. It is not the same concept as the length of time required for the simple model itself. When the mixer is used for a period of time, various parameters may change, so it is necessary to check and test regularly, and adjust the time required for mixing according to the inspection results. 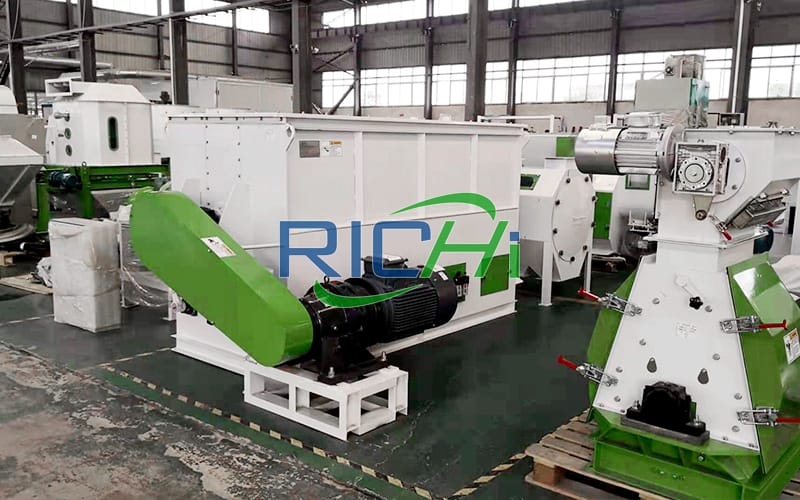 5. The operation method is very important when mixing the feed

For the production of additive premix, the mixing method should be gradually expanded from micro mixing to small mixing to medium mixing and then to large mixing.

In order to ensure the mixing quality, the running performance of the cattle feed mixer should be checked regularly, the bearings and the joints of the movable shafts should be frequently added with lubricating oil, the worn parts should be repaired and replaced in time, and the best one should be correctly determined according to the results of the uniformity sampling Mixing time. Frequently check the operation of each switch, clean up the debris in the cow mixing machine, remove residual materials around the door switch, make the door switch flexible, and prevent material leakage.