Theoretically, a ring die and a pair of press rollers can produce pellets of 2000 tons and 500 tons respectively (the high-grade ring die and press roller are not considered here). But in fact, the animal feed production factories with better management only have more than 1,000 tons and more than 250 tons; and the animal feed mill line factories with poor management, even with only 500 to 600 tons and 80 to 10 tons, have to replace new ring dies and press rolls. It can be seen from this that extending the service life of the ring die will bring considerable benefits to the poultry livestock feed production enterprise.

During the normal working process, the ring die always has friction with the material. With the increase in the amount of production materials, the ring die gradually wears out and eventually leads to failure. Therefore, one of the indicators to measure the working performance of the ring die is the production volume. However, in the actual animal feed making line production process, most of the ring die fails before reaching the theoretical production capacity. Because ring molds are expensive, this causes certain losses for users. This article intends to analyze the reasons for the failure of the ring die, so as to make recommendations on the manufacturing and use conditions of the ring die.

From the actual failure of the ring die, it can be divided into three categories. The first type: After the ring die has been working for a period of time, the inner wall of the small holes of the discharge is worn, the diameter of the hole increases, and the diameter of the produced pellets exceeds the specified value and fails; the second type: After the inner wall of the ring die is worn, the inner surface is severe , So that the flow of feed is blocked, the output is reduced and the use is stopped; the third type: After the inner wall of the ring die is worn, the inner diameter is increased, and the wall thickness is reduced. At the same time, the inner wall of the discharge hole also wears, so that each discharge is small. The wall thickness between the holes is constantly thinning, so the structural strength decreases. Before the diameter of the discharge hole increases to the allowable specified value (that is, before the first type of failure phenomenon occurs), cracks and cracks appear on the most dangerous section. Continue to expand until the cracks extend to a larger area and cause ring die failure. The substantive reasons for the above three failure phenomena can be summed up, the first is abrasive wear, and the second is fatigue damage. 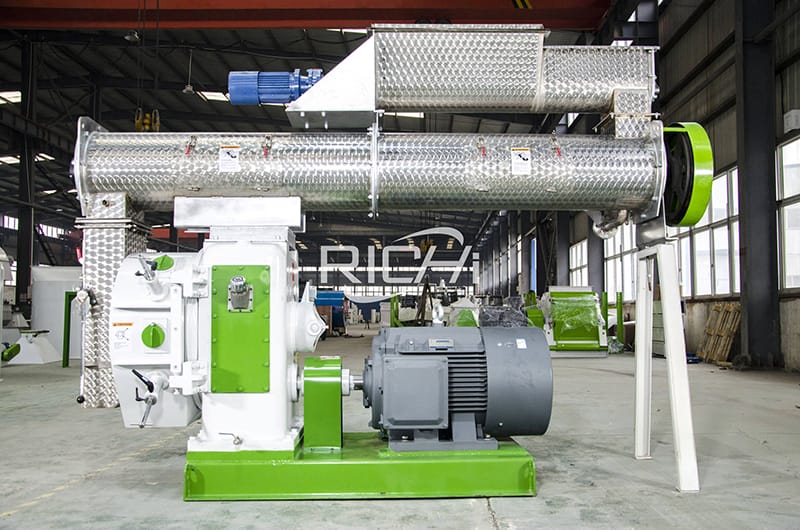 There are many reasons for wear, including normal wear and abnormal wear. The main reasons for normal wear are the formula of the material, the size of crushing, and the quality of the powder. Under normal wear and tear, the ring die will be uniformly worn in the axial direction, resulting in larger ring die holes and thinner wall thickness. The main reasons for abnormal wear: the pressure roller is adjusted too tightly, and the gap between the ring die is small, and each other wears; the angle of the spreader is not good, which causes uneven distribution of materials and some wear first; metal falls into the die and wears. In this case, the ring molds are often worn irregularly, mostly in the shape of a waist drum.

The fineness of the raw materials should be moderate and uniform, because the fineness of the raw materials determines the surface area of ​​the feed composition. The finer the particle size, the larger the surface area, and the faster the material absorbs moisture in the steam, which is beneficial for conditioning and particle formation. If the raw material particle size is too coarse, it will increase the wear of the die, and cause the productivity to drop and the energy consumption to increase. It is generally required that the raw materials can pass through the 8 mesh screen after being crushed, and the content on the 25 mesh screen should not exceed 35%. For materials with high crude fiber content, adding a certain amount of grease can reduce the friction between the material and the ring die during the feed pelleting process, which is beneficial for the material to pass through the ring die, and the appearance of the particles after forming is smoother.

Excessive sand and iron impurities in the material will accelerate the wear of the die. Therefore, the cleaning of raw materials is very important. At present, most poultry livestock feed pellet manufacturing plants pay more attention to the removal of iron impurities in raw materials, because iron materials can cause strong damage to the die, roller and even equipment. However, the removal of sand and gravel impurities is not emphasized. This point should arouse the attention of granulator users.

Adding steam to the material can soften the material, split the oil-containing cell tissue in the material, and make the oil in a free state, which plays a lubricating effect during the poultry livestock feed granulation process, thereby reducing the wear of the material on the die and improving the poultry and livestock animal feed pelleting machine output. Generally, the pressure of adding steam should be between 0.2～0.4MPa. The pressure level varies with the types of compressed materials. For materials with higher protein content, the steam pressure should be slightly lower. For materials with more fiber, the steam pressure can be used slightly. Taller. Adding steam should make the water content of the material reach 16%-17%, and the temperature of the material after quenching and tempering should be at 78～87~C.

⑤The installation angle of the spreader 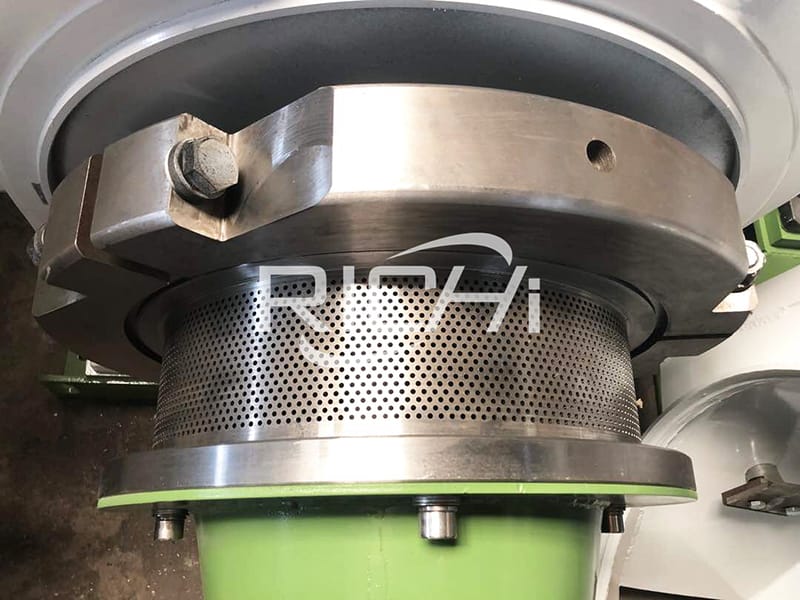 The ring die of the poultry livestock feed pellet granulator equipment is a porous ring-shaped part. The working conditions are bad. It bears the squeezing force of the roller and the friction force of the material for a long time during the use process, causing it to produce bending stress and contact pressure stress. However, these stresses are not factors that affect the life of the ring die, and the main failure mode is from fatigue failure. The ring die is subjected to alternating effects during the pelletizing process, which indicates that its alternating stress is asymmetrically cyclic, and the ring die usually undergoes fatigue failure. This is consistent with the failure results of the ring die in actual use. On this basis, it is proposed to appropriately increase the width, thickness and inner diameter of the ring die to improve the bending resistance and productivity of the ring die. At the same time, increasing the inner diameter and effective extrusion length can significantly reduce the contact pressure stress of the ring die.

The ring die is usually made of carbon (alloy) steel or stainless steel through forging, cutting, drilling, heat treatment and other processes. When the ring die is drilled, a multi-hole gun drill should be used to ensure the quality of each hole. During heat treatment, vacuum quenching equipment should be used to avoid surface oxidation and decarburization that often occurs in ordinary equipment, so as to obtain higher hardness.

When designing the shape and structure of the ring die, the number of grooves distributed along the radial direction on the outer surface of the ring die should be minimized and its depth should be reduced. Because the grooves distributed along the radial direction are the most prone to stress concentration. Under the action of long-term alternating stress, it is easy to produce micro-cracks in this part first, and then gradually expand, and finally cause ring die fracture.